Made It To California! 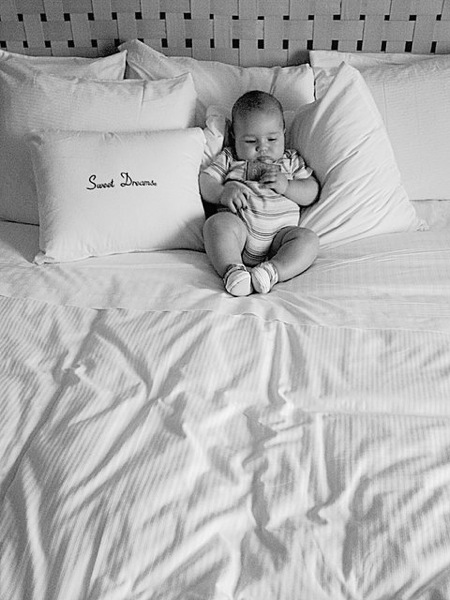 It took us quite the effort, time and energy to get to this moment where Alex leisurely took over the entire beautifully made, queen size bed at Double Tree Hotel in Santa Monica, California.

Our initial flight was supposed to leave from Baltimore around 7 pm on Friday, have a reasonable layover in Minneapolis/St. Paul and then make it out to California by midnight. We decided to splurge and spent two nights by the Promenade in Santa Monica and enjoy the Californian sun, friends from this area and refreshing scenery.

Right before we left the house, Michael got a notification that our flight to Minneapolis was delayed so that meant we were most probably going to miss our connection to LAX. On the way to the airport we got a phone call from Delta Airline offering me a $300 travel voucher to change my initial (already delayed) flight to an Atlanta one. After we made sure both Michael and I got on, we thought it was a perfect solution. Not bad making $600 and catching a flight that we truthfully thought will get us to our fun destination. We cheerfully checked in for a 8.20 pm flight to Atlanta. It was only 5 pm so it meant spending some time in the airport but we didn't mind that,  especially that Alex seemed to be happy with the new surroundings. Half way through enjoying a light dinner, Michael got another notification that this new flight was also delayed. He hurried over to the counter and managed to get us rebooked on an earlier flight, leaving BWI for ATL at 7 pm. Even better we thought, we will have enough time to make our connection for LAX for sure and not stress about it especially that this trip was our first one hauling around all this baby gear.

We boarded on the airplane with a slight delay, but nothing to worry about. When time came for the plane to take off, we were told that it got pushed 45 minutes due to a storm in Atlanta. An hour later we got told that the flight was pushed for another hour. By this time it was 8.30 pm and chances of us getting out of the airport at all were getting slimmer by the minute. Meantime we found out our first ATL flight got canceled. The best decision was to just forget about all these flights and try to rebook a whole fresh one for the next day.

Around 9.30 pm our luggage was already on its way to California while we were driving back to the house for a few hours of sleep before having to go to a new airport, Reagan for our 6.45 am flight. Fun, fun. Sleepless and a bit skeptical, we presented ourselves to DCA by 5.15 am where yet a new surprise was waiting for us: the agent who booked us the night before might have made a mistake because no one at the check-in counter was able to print out my boarding passes! We were slowly running out of time and at this point I started to panic inside a little. But all came through together at the last minute and we were running now, me pushing a stroller with a sleepy but happy Alex.

The only sunshine in all this craziness was seeing how well-behaved, smiley and laid back our little guy was. This was his first trip by plane and without a doubt it was one of our worst experiences ever! Still, he behaved very well in each flight, he charmed people and flirted with flight attendants. God has blessed us with the perfect baby who's now enjoying his well deserved nap in the big, comfy bed.