First Night in the Crib

From reading I've done and what other moms told me, I got this idea in my head that at four months is the best time to teach our little one new sleeping habits. I don't mind at all holding Alex and rocking him gently in the comfortable glider chair but that means the house will be a constant mess, dishes will pile up in the sink, my own hygiene will start suffering and basically nothing else will get done around the house. This week Alex is stepping into his 16th week of life so I decided to try some new things on him.

Yesterday morning after spending a little time with daddy so mommy can sleep a tiny bit longer, I put him down in the crib for a few minutes so I could go downstairs and prepare my morning oatmeal. By the time I came back upstairs he started dozing off in the crib so out of curiosity I let him be in there until, miraculously he felt asleep all on his own. He had a very long, solid nap comparing to the times I would rock him to sleep and gently put him down in the crib. I did the same thing with  other two naps he took that day and every time, after 10 minutes or so of just fussing, he would close his eyes and be out like a light.

Evening came and I figured why not give it a shot and put him to sleep in the crib for the night? So far Alex was sleeping in a bassinet, right next to our bed so I would easily hear him through the night.  After I fed him, I put him down but it took him longer to fall asleep by himself. Was rubbing his back and shushing in his ear but eventually he felt asleep by 10 pm. He woke up about two times and I gave him only the pacifier (when he was in the bassinet I would give him the bottle every time he would wake up) and he went back to sleep right away. About 4 am when he woke up again, I figured he might be hungry so I gave him some milk. He easily went back to sleep until 8 am! I think he did wake up one more time around 6 am and I gave him the pacifier but I'm not quite sure.... Sometimes nights can be so blurry in the morning.

All in all, I consider his first night in his crib a very successful one! I slept better, deeper and I think Alex did too, making all of us a happier bunch in the morning:)

Here's a picture of our happy Alex sharing his crib with his buddies. 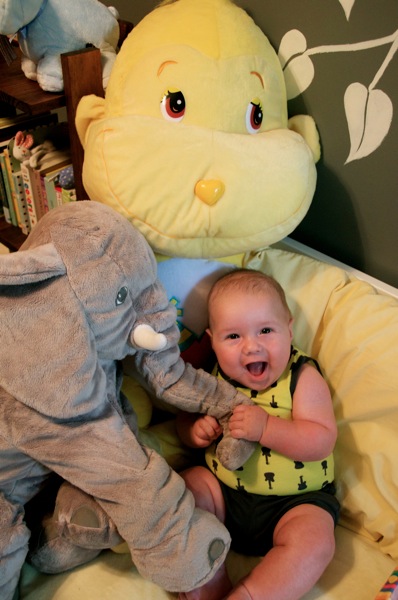