Pictures of Our Little Geek ....

Where's the boom? There is supposed to be an earth shattering kaboom!

Posted by uthanda at 8:40 PM No comments:

Our trip back to US

This blog entry is way overdue. If my life had a really slow tempo to it while being in Romania, ever since I got back, I felt I have endless list of things to do each day. So the reason I didn't write anything yet about the trip back was both being busy but also I've been waiting so I could post a couple of pictures of Alex at the airport in Munich. We had to kill four hours which turned into five in that airport but it wasn't that bad, Alex was completely fascinated by the planes and happy to play with the little toys from my magic bag. I brought along this bag with all sorts of small toys that I could pull out one after another and entertain Alex with. Well, it worked to some degree but then at one point, Alex just grabbed the entire bag and was walking around with it in the airport. Quite cute.

The journey back to the States started at crack of dawn. We left Zalau at 3 am so we would make it to Cluj by 4.30 am. Our first flight was leaving Romania at 6 am. We made it there no problem, one of my bags was just a little overweight but other than that, Alex and I easily went through security and made it to the other side. The hardest thing was to say good bye to bunu and buna. I will have the memory of my crying mom, burying her head in my dead's shoulder while holding his arm tight, for a long time in my head. They got so attached to Alex, and him to them… My dad told me that Alex looked a little puzzled when we were waving good bye as in to why isn't bunu and buna following us anymore.

By the time we boarded, Alex started to get a little cranky. He felt asleep easily and dozed off for half of the trip. The other half he played and squeezed a stinky one out. We were towards the end of the airplane so I ran back and changed him really quick before we got off. Not sure why, but the area where the plane from or to Romania arrives, it's pretty far away from the terminal. After we make it there, we have to get on a bus and take a short ride to the terminal. Being at the end of the plane I was pretty much the last one to get off, the entire bus was already full with all the other travelers. I looked around to grab my red stroller but no sight of it. I let someone know and they started talking in their walkie-talkie and making some pretty desperate signs in my opinion. Oh, great, I thought… I will be stuck in the airport without a stroller!! Everyone on the bus was probably annoyingly waiting for the last passenger to get on so they could move on with their trip. Well, I needed my stroller so I wasn't going to move from the tarmac until I'd see it. After a few long minutes, my dear stroller showed up and I could almost hear the sigh of relief from the people on the bus.

We made it to Munich at 7 am in the morning and our next flight was scheduled for 11.40 am. Wasn't quite sure how our time in the quiet (for now) airport would be. I started pushing the stroller and was ready for my next fragment. After the trip to Romania by myself, I was very hesitant to start the trip back. Just a few days before we left, I was sending desperate emails asking people to pray for me. I've got some great encouragements from Bible verses to just short messages like 'just drink lots of coffee, suck it and do it!':)) By the time we got on the car and drove off in the middle of the night, I felt a little empowered and ready to do this. While riding the car to the airport I came up with the idea of looking at the trip in a different way, instead of thinking already what's ahead of me, just take one little segments at the time. The ride to the airport for example was so nice and smooth. Alex was awake but pretty content with sipping his tea and enjoying buna's hugs and kisses. The short flight to Munich passed by again pretty easy then the next fragment of the trip arrived where the airport will be our base and I will have to keep Alex busy and happy.

As time started to enroll, it turned out that one hour passed by, then another one. I thought Alex was getting really tired so I decided to go ahead and try to get him to sleep in Ergo while waiting by the gate where we were supposed to board. Alex wasn't quite on board with my plan because he cried and cried while I was holding him in the Ergo. After everyone in the waiting area got to know that there was a little baby around, I've decided to take him off and let him loose again. Maybe it would be better this way, he would get even more tired and by the time plane takes off, he will fall asleep like an angel and doze off for the first few hours of the eight hour flight. So we played some more, make friends with other travelers, poked around, felt once pretty bad etc and time was passing by.

People started to line up for boarding now and I figured the time couldn't be better. I had put Alex in the stroller so I could roll him easier to the plane but I could see that he was getting sleepy too. I kept buzzing him so he wouldn't fall asleep, we were just a few minutes away from boarding… or that's what I thought. Suddenly, we were told that due to some issues regarding fueling, the flight would be delayed for an hour. WHAT?? There was no way I was going to keep up Alex awake for another hour so I've decided to let him fall asleep. And so he did, like an angel in that stroller. I've walked around for 45 minutes or so when they started boarding. I've waited until the last moment so Alex would be in a real deep sleep and transfer smoothly but eventually I had to board myself. Of course my little goober woke up the moment I took him off the stroller. The moment we got to our seats he started screaming, I mean really screaming. I've tried calming him down but there was nothing, absolutely nothing that would make him happy. I've hold him tight praying over and over. There was nothing else for me to do but to ask God for help. Eventually he quieted down but didn't go back to sleep.

The plane took off and our last segment of the trip started, the long, painful fragment.  I've started pulling games and toys from the magic bag, I played some Baby Einstein on the laptop, when allowed, we walked around the airplane etc. We killed an hour, seven more to go!! I didn't even want to know how much time passed by because I would only get discouraged. We got our food and this time, it worked that Alex stood in front of me, while I was holding the tray on the little table in front of me. We both ate a little bit, was impressed that Alex enjoyed too some of the airplane food. Did some more walking, playing and eventually he got tired again. I've tried to put him asleep on me but no success. I grabbed my Ergo and went to the back of the plane. He felt asleep in it and I was either standing (awfully heavy!!) or leaning on this emergency exit which turned to be a dangerous thing to do. Oh well, at that point, I don't think I cared anymore… I had to rest on something or was going to fall on my nose.

Alex slept for about an hour when we went through some little shaking in the sky and the pilot turned the seatbelt sign on. A flight attended asked me to go back to my seat and didn't soften up a little when I told her that my boy will wake up. I was right, the moment I unbuckled and sat my tired but on the seat, my little boy sprung up ready for another round of play. What about mommy?? Was already 3 pm Romania time so it meant I was already up for 12 hours. Five-six more to go!! I can do it!!

The rest of the trip Alex didn't go down again. We just played, went back and forth (annoyed so many people I think), hang out at the end of the plane, laid on the floor, smiled at flight attendants and sucked the last drop of energy out of mommy. Eventually, the captain announced that we were approaching DC airport. Wow, I started to feel the light at the end of the tunnel.

We landed safely and by now my brain was already getting out of gear. I knew I had one more little step to the trip, going through customs, but I also knew that my big help aka daddy was just beyond those glassy doors. Just the thought that his presence was so much near by gave me that last wind of energy to accomplish this thing. While waiting in line for customs, my little one faded away. He felt asleep and didn't even notice an excited, emotional and loving daddy waiting for him just across the line.

The moment I hugged Michael, I felt like a huge rock felt off my shoulder. Yes, I made it, I am with my husband, I don't have to do this by myself anymore, thank you Jesus!!

A week later as I write this, I look back and the trip maybe didn't seem that bad. It was doable, it was exhausting but like my friend said, 'just do it!" Well, I am glad for all the prayer support because I know only God gave me the strength to go through it. 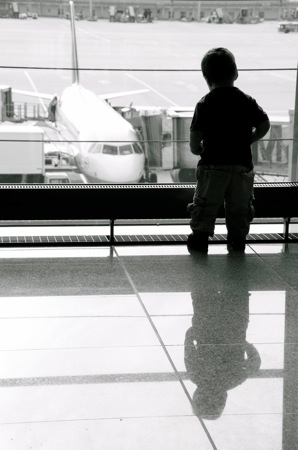 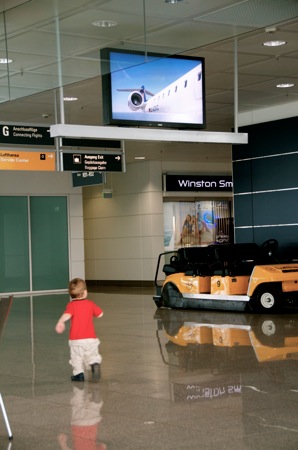 Was sitting under the play set while Alex was running around above and captured this short video.