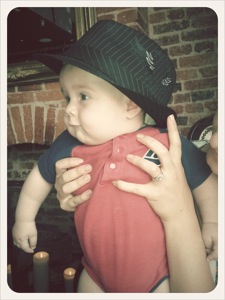 I was just looking back at the numbering of these blog posts and something appears to be amiss.  I think we may have missed a week somewhere along the line.  Oh well, no matter for now. (Edit: I went back and discovered that somehow the 8/7 and 8/14 blog entries were mis-titled)

We had a really event this week.  Alex got his first tooth.  Well, almost.  As of today, it's started poking through the gum and we can see a bit of white.  It'll be a while before he gets the tooth as a whole, but we're getting closer. I'm still struck by how easy going he seems to be.  Even with the pain of teething, he never really seemed to be out of sorts.  In fact, if you didn't know what was going on, you wouldn't even know he was in pain … or maybe he wasn't.  Who knows.  Maybe he's gotten mom's tolerance for pain.

Let's see what else happened this week.  To be honest, since I spend most of my days working while he and mommy go play, I often forget exactly what happened during the week.  However, I do remember at least one fun event we went on.  This week was DC Beer Week (I know, something strange to mention on a child's blog ….), so on Wednesday night, we headed over to Smith Commons near our house.  It's the first time in some time that the three of us went out on a "school night".  In fact, the picture posted with this entry was from that night.  To post it, I used an Android app called picplz and had it posted to Twitter.  Anyway, in addition to having a cool picture, the people and Smith Commons liked the post and retweeted it. Not bad, eh?

One other major milestone for this week is the continued transition towards solid food.  We've started adding more and different foods to the list of what he can eat.  This week Feli added smooshed peas to the menu.  I'm not 100% positive he likes them.  You should see some of the faces he makes.  However, he does eat them.  In fact, we have yet to find anything he won't eat.

Email ThisBlogThis!Share to TwitterShare to FacebookShare to Pinterest
Labels: Week in Review