As Felicia mentioned in her last post, this has been a bit quieter week than before now that Bunu and Buna have gone home.  I kind of wondered what Alex would do now that his constant companion in Buna was no longer around.  I kind of expected him to be a bit depressed or at least a bit more fussy that before.  I guess I can report that he’s still the same happy little guy as before.  Mommy, maybe not quite as much as the weight of being Mommy comes crashing down on her.  But we’re trying and will eventually reach a new state of equilibrium, just like when the grandparents were here. 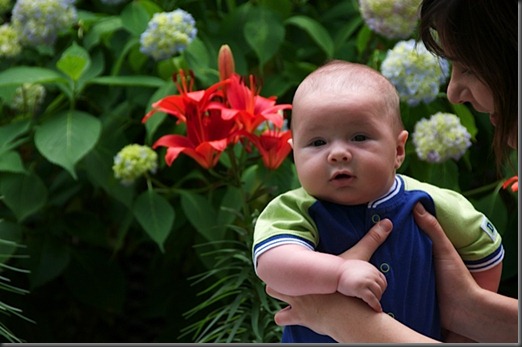 In the meantime, I’ve personally started to notice just how good of a baby Alex really is.  He seems to be much more laid back and mellow than he was when he was first born.  It’s fun to watch him as he wakes up in the morning with a smile on his face and as he lays on the floor or in the crib and burbles at his toys or the ceiling fan.  I don’t think we could ask for a better little guy.

Firsts: He seems to be getting a bit more motor control.  This week he grabbed my finger and managed to bring it to his mouth to suck on it.  And in fact, he did that a number of times.  Each time was a deliberate grab, pull and suck motion.

Ups: Biggest up by my calculation is just how happy the little guys is most of the time.  He’s not whiny or grouchy, except when hungry, tired or wet.