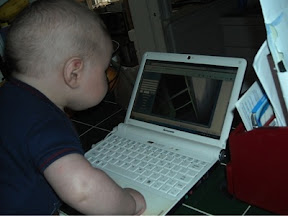 You know, I think this is the first week that I can honestly say that our little guy didn't do anything new. Each week so far he's done something different, like first national park ... Oh wait. He did have his first brunch. As a thank you to Feli's parents for all the help they've been over the last two months (has it really been 8 weeks since they arrived .... Sigh) we took them for brunch at the Argonaut. Of course, he slept through it all.

And that brings us to one of the good things right now. Unlike that first 6 weeks or so, now Alex sleeps through the night(ish) and is so much happier. A short while ago our little buddy was just unhappy for no good reason that we could discern. Today, he's generally a smiley and happy baby. Of course, if he's tired, hungry or sitting in poo, then he will get a bit cranky. But then who doesn't

Firsts There were really two firsts this week. Brunch as mentioned before, and now he's starting to try and sit up. Well more specifically, if you hold his hands he'll pull himself up. The guy just loves looking around. In fact, he and Buna will spend hours walking the sidewalk in front of the house just watching as life goes by.

Ups He's coming close to sleeping through the night. He will wake up, but eat a bit and then continue sleeping.

Downs No majors downers this week. I won't say things are perfect, but overall, things are good.