Last Saturday afternoon Alex started a week of sickness with a violent throw up. I can count on the fingers of one hand the few times his stomach actually upset him bad enough to throw up. This time around he made up for the lost time and made a big, messy statement on him and his mamma. Later that day he started having really bad diarrhea too.

He had these symptoms going on for five long days. The happy little boy Alex was, turned into a very cranky, hard to please, whiny, needy, sometimes violent toddler. He was just unrecognizable, poor baby.  He was just in pain and very frustrated for not being able to express his aches. Between bunu, buna and I, we managed to keep up with him these days but I must say that at the end of the day, all three of us were exhausted from caring for him.

He didn't run fever except a little at the beginning. His appetite was really bad but at least he kept drinking his fluids: water, tea and lactose free formula. We kept him on a simple diet and we finally see the end of this sickness. Today he was a much happier baby, almost his old self. When sick, he hates being in large crowds and outside. Today, he was happy to be outside most of the day. It was a very good sign. I hope he wakes up with a smile on his cute face tomorrow morning. 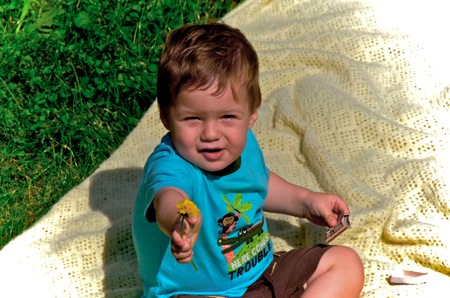