A little update on Alex

It's been a while since we wrote an update on what Alex's new 'tricks' are. He's 15 month old now and he's a toddler in the true sense of the meaning: very curious about everything and not stopping for one second, always on the go.

He was sick for the past few days actually and that made him a little more needy and whiny than usual. Unfortunately his bronchilitis came back (he had this thing back to US a few months before we came to Romania) but it also triggered some pneumonia symptoms. I was shocked to hear that but the worries went away soon, seeing how well Alex reacted to the treatment and how much better he would get by the hour almost.

Here are a few things he does:

- He understand Romanian very well, responds to most of our commends like 'bring the ball', 'give me the key' etc and proves how many words he knows. One of his new favorite things to show off is his belly…. just like in this photo:) If you ask him where the 'burtica' is (little belly) he pulls his shirt up, points it and then points at yours and wants to see yours too!!

- He walks very well and today his secure walking took a turn for the worse… I think. He realized that besides walking, he can run. Bunu and buna told me this actually as they were the ones who took him outside for a bit. They said he suddenly got this new confidence and starts running.

- He started giving hugs more. He's never been the cuddly time but now, sometimes for no reason, he just walks towards me and wants to hug me. It melts my heart for sure.

- He makes a lot of sounds but is not forming words very well. We expected this as he's learning two languages at once so I'm not worried. He will start speaking soon enough and would actually enter the 'why?' stage which I'm not quite looking forward too.

- He sure loves his bunu. There is a special bond between the two and there's no doubt about it. I think there is something between all three generations: my dad, Michael and Alex… they all have the same sense of humor although Alex's hasn't quite come out yet this early. Looking forward to see them all together in a few years.

- He started to eat better. He started to like more cooked food, some veggies (eats tomatoes and cucumbers a lot). He's also crazy about 'pufuleti' these corn puffs I grew up with.

- He loves playing with other kids… he starts getting excited just seeing other babies in videos I might show him. When his cousin Timi comes over, Alex is willing to skip naps just to have a little more play time with him.

- He got his first haircut… by me!! The day before Michael was here, we gave Alex a bath and grabbed the scissors. Have never cut a child's hair before and I really had no idea what the outcome would be. I did know though that Alex's hair started to be so long, he would sweat so bad during the hot days. It turned out that his haircut was decent enough that he could take his face in public still. And so would I.

All in all, we are all having a good time in Romania. He's growing up beautifully and his mental development amazes me each day. What a blessing this little guy is!! 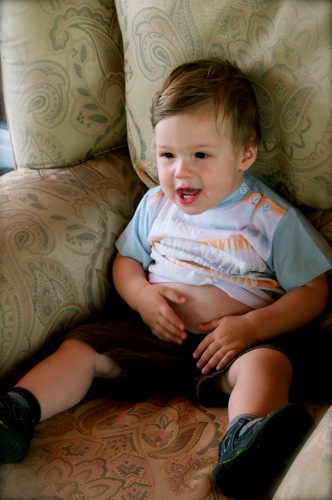