Back in December when we bought the tickets for my trip to Romania with Alex, everything sounded so perfect and easy: Alex will be 14 months old, I will travel to Romania with him by myself, Michael will come and visit sometime in the middle of our pretty long stay there (ten weeks). The more the date of departure approached, the more Michael and I were dreading what it involved. Jokingly he would say, even on the way to the airport, 'it's not too late to back out'.

Here's us, saying good bye to each other in a rush. We were running tight on time so it was really quick. Maybe it was better that way, I didn't have time to tear up. 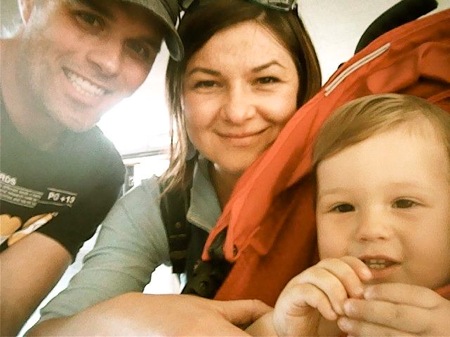 Speaking of our ride to the airport, we left on time from home but we should have factor in the crazy DC traffic. We made it to Dulles with an hour and a half time to check in and make it to our flight. Going through the long security line was when I first started sweating bullets: the moment I took Alex out of the stroller, he started climbing the bottom part of the security tables. After putting everything on the rolling band, I grabbed Alex in my arms and finally had to ask a little assistance with the stroller from the three security guards standing right next to me and just chatting away. I wish they were trained better in assisting people too, not just making them strip and walk through metal detectors. It wouldn't hurt adding a little sensitivity to needs around them to their service.

Made it through the security and embarked on one of those ugly but functional 'plane mates' which Alex found pretty exciting of course. By the time we made it to the D gates where we were taking off from, it was 5.06 pm and my flight was at 5.32. I thought 'I still have a few minutes to spare, I MUST find a bathroom!' I stopped by a ladies room for a few minutes which I really should have done before I went through the security. When I got to D3 no one was in line to board, I was the last one!! We made it to our economy plus seat and without a doubt, the older couple sitting next to me lost their color in their cheeks when they saw me holding a baby.

It's interesting how under a little bit of stress, all inhibitions are gone. The reason I say that is based on some of my actions just as we boarded: I courageously opened one of the top compartments (by now they were all pretty much full) and moved some stuff around to fit at least my backpack. Couldn't close the top so I made a guy get up and help me push it. Just as I wanted to sit down, I couldn't find my cell phone in my big black bag. I kept Alex somehow happy in the sit, while I was frantically looking for it. I knew I last had it in the back pocket in the stroller and was afraid I left in there. That was a deja-vu of what happened to Michael once when he clipped his cell phone into a big backpack he checked in. The guy at the counter had to run somewhere behind to find the backpack and 'save' the cell phone. It wouldn't have made it in one piece if it was checked in. I grabbed Alex and ran back to the front door we came in hoping to still catch the stroller there. People in the business class didn't appreciate the view of a sweaty mom, holding her baby and running through the cabin. As I said, I didn't care I was spoiling their cocktail hour, I had to find my phone. An understanding flight attendant was by the door and he gladly checked the stroller for me. The cell phone wasn't in the pocket. OK, I breathed… than I must have dropped it in my big 'black hole' bag and just didn't see it yet. I went back to my seat and after a little more search I found it. "Thank you God!" I did say that out loud and sat down while holding Alex.

We left the gate, were ready to leave when out of the blue we were told there was some 'paper misunderstanding' that needed to be taken care of and we returned to the gate. An hour and a half later that seemed like an eternity trying to keep Alex happy, entertained and (key word) quiet, we finally took off. I was already so drained out that I didn't worry as much as I would normally do at the possibility that I might not make my connection flight. That exactly the time I had in Munich airport, an hour and a half to make it to my flight to Cluj. I was happy we finally took off and I figured I would cross that bridge when I get there. 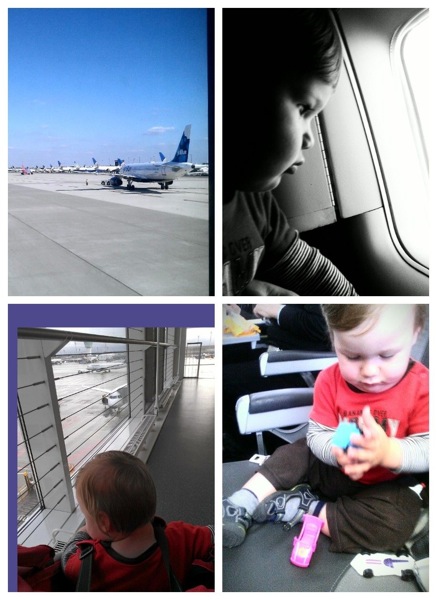 The dinner started being served on the plane but there was no way I was able to eat with Alex in my arms. I grabbed off the tray whatever was easy to hold ( a roll and a packed brownie) and passed on the meal. Luckily I was inspired to pack a granola bar and some trail mix I was able to munch on and off during the flight.

When I stopped by the ladies' room before boarding, I was inspired to put on this back support medical belt a friend of mine gave it to me for the trip. She heard me complaining about lower back pain so she suggested I should take it with me. As it turned out, this belt probably saved my back. It was not easy holding a 30 pound boy either sitting down or even more, standing. Twice during the trip I had to put the Ergo on, take Alex in the back and stand there for a while. After he felt asleep the first time and seemed really totally out of it, I came back to my seat. I really thought he was passed out, after all I managed to go to the bathroom, in the air, while holding him like that… not an easy task, trust me! Another friend of mine who traveled to China with her daughter suggested I should take the Ergo on the plane if for no other reason, but to be able to go to the bathroom with him. Didn't even think it was doable to do that, but when the need is there, one is willing to try anything, right?:) When I went back to my seat and tried to get him out and get myself a little more comfortable, the little one woke up smiling at my neighbor. Forget about sleep, back to being entertained I guess.

After unsuccessful attempts to get him to sleep while sitting down, I got up again with him. I didn't even know how long it's been, but I was praying this flight will go by faster. Alex didn't want to fall asleep in the Ergo so we came back to the seat. While being in the back, I noticed a gentleman on the last row with an empty seat next to him. I already thought 'oh, perfect! I can offer him an extra leg seat and Alex and I move back here.' I asked the flight attendant if it would be ok for me to that and her reply cut my enthusiasm short 'we've already asked him twice to do that, but he doesn't want to move.' :( I was sad to see how selfish some people can be. I am very much aware of our own human egoism but to come across it when I was in so much desperate need of a seat, made me very sad.

Eventually, Alex felt asleep in my lap and for a couple of hours maybe he kept tossing and turning in my arms. I might have dozed off for a few minutes too, not even sure. For some time, I was in such a daze… At one point, I almost started crying but I managed to swallow my tears and kept going on. It was funny how at one moment my older gentleman neighbor was very nice and understanding and the other, I would feel him all tensing up and annoyed. Alex was actually so friendly with him, he would laugh at him and try to reach for his glasses. At one point, my neighbor switched places with his wife but then quickly returned to his initial seat because on the other side, I overheard, he didn't have much room because of the overweight lady next to him. I guess better a baby than a chubby lady!? He was a little tipsy by now and gave me instructions on how to bring my own booze the plane. He was American but in partnership with an Ukrainian and Polish guy, I assumed he picked up a few tips from them while working in our part of the world.

The long flight was coming to an end and we made it to Munich. The moment I got my stroller, I put Alex in and started running for my life. The elevators meant to use by strollers were operable only by key, by flight attendants. Who had time to wait for that? I grabbed the escalator despite the sign of 'no stroller'. After two sets of escalators I made it upstairs and realized the gate we were leaving from was pretty close. I felt better but still ran as fast as I could. They were slowly getting ready to board as I made my way there. I took a deep breath and was happy I made it!

We boarded slowly and soon we were up in the air again, this time on a much shorter flight. I had a window seat this time so Alex saw clearly us taking off and getting up in the air. At one point, I think he realized that and he started hugging on me tightly. It was so sweet to feel him against me, finding comfort but being all excited at the same time. He slept for a bit, than we played with cars, chatted with the couple behind and before we knew it, we made it to our final destination.

It wasn't an easy trip but I realize it could have been even harder. Alex behaved and was a good boy. All in all it was a good experience for both of us. It's my first and last international trip by myself though.