I have to admit this photo was taken mainly for Michael who knows about this 'special' car, Dacia. It's a Romanian manufactured car and for most years, nobody in this country had anything but Dacias, just lots of different colors. It belongs now to Renault and the newer models look very sleak. However you can still see some of the old ones running around and Alex got to even touch one. I see a lot of Michael in Alex but I still think he looks more like me. Here's him pointing at my portrait but probably thinking 'mommy, look, it's another Alex':). My hair was darker but you can totally see that the round face and the dark eyes Alex has are all Eastern European features inherited from moi. My dad painted this portrait of me when I was in kindergarden, I recognize that by the uniform I was wearing.I  might have been here four years old or so. 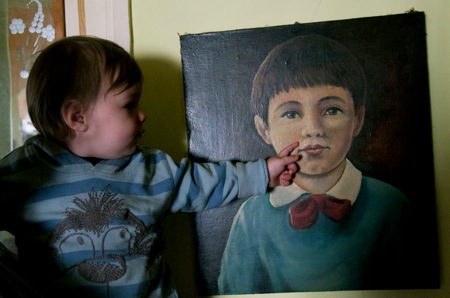 My precious eye-brown boy turned fourteen months old this past Sunday. He's getting faster walking and quicker thinking. His little brain is working and processes everything that's going on around him. His Romanian is improving greatly, understands a lot and tries to say words too although the most he says is 'apa' which is 'water' than some 'mama' and 'dada' or 'tata' but not sure if he actually means the words or those sounds are just easy for him to utter. Still, I am very happy with his progress in Romanian considering we just got here less than a week ago. 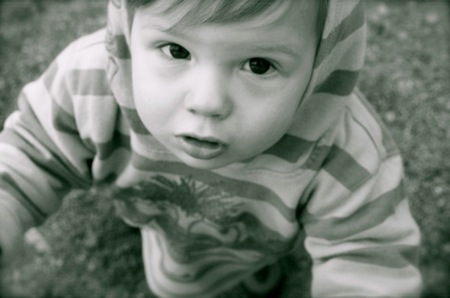