A few times today it crossed my mind that I should do something out of the ordinary being Leap Day and all. A friend of mine reminded me through her post on Facebook last night that four years ago I've decided that Michael and I should start doing something extraordinary on Leap Day. I dug out the blog entry I wrote about it and it helped me remember that day pretty vividly. It's funny to see the anticipation and expectations I had for the BIG day, just to see the small results I got at the end of it.

Well, four years passed by since then and here I am on a rainy Leap Day playing with a baby who's not quite walking yet, who finds interesting the most simple things, who giggles as he's being chased by daddy and who whines about the food being put in front of him at dinner time. It's Leap Day and even if mentally I took note of it a few times during the day, there was no big desire in me to do something extraordinary like four years ago. At the end of it now, I do believe that I had a remarkable day spent with my son and husband, I find myself very grateful to God for how much He's blessed me through these four years and it only makes me look forward with anticipation and what's going to be like in the next leap day...

Somehow I took a look at Alex's blog tonight and realized that if I wanted to do something out of ordinary, I should finally update it. It's embarrassing (again!!) how long it's been since last time I/we wrote something. I see that last entry was posted exactly a month before Alex turned one. February 22nd which was last week our precious son celebrated his first birthday and it was quite a memorable day. He got sick for the first time, he caught some virus that brought high fever going up to 104.5 and for three days and nights he was not a happy camper.

Fortunately, we already had his birthday party with the kids that past Saturday. We celebrated Alex with twelve of his many kid friends and some parents at Playseum and it was a blast. After some thinking, Michael and I decided to throw him not just one party, but two: the first one for kids, and a second one for our adult friends, either single or without any kids. This second party we had to postpone it for a week because of him being sick but it's coming up now in a few days.

This past week we had his one year doctor's appointment and he's still a big boy: he is 31.5 inches long and weighs 28 pounds. I think he actually lost some weight when he was sick because he hardly had any appetite because he weighed the same at nine months. He is very active though, crawling every where, going up and down the stairs. He is obviously burning some extra calories now. He is still a very happy boy, who is very attached to mommy and daddy, who loves spending time by the basement door and waiting to see daddy coming up the stairs, who is impatient for his milk when it's nappy time, who is very ticklish and who loves looking at books. His favorite thing in the world is to push buttons, any kind: remotes, alarm system, radio, microwave, etc. Someone likes blinking lights and buttons just like his daddy does! In that aspect, we think he has more of Michael's personality than mine. He's slowly developing his character and it's crazy to see how opinionated they can already be at one!! He cries when things are not done his way but show him a remote and he gets all happy again.

Here are some of the pictures we took of him at the birthday party. Mimi and Papa were in town that weekend so it was extra special to have them be part of it. 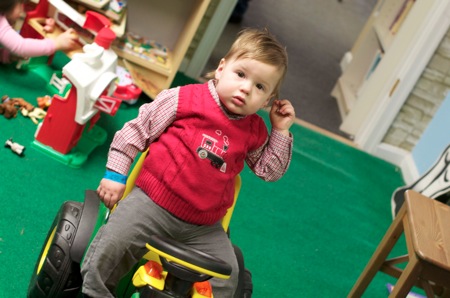 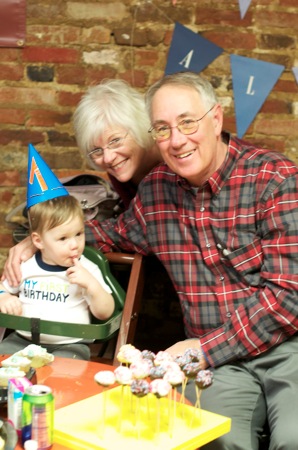 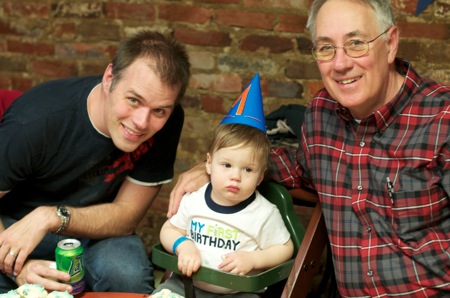 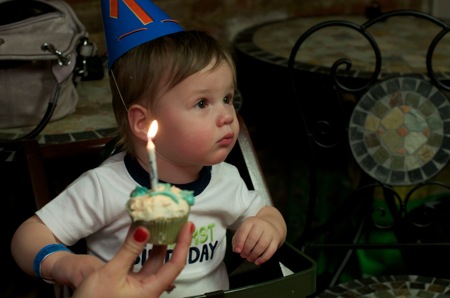 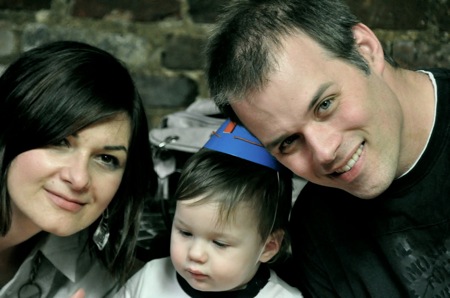 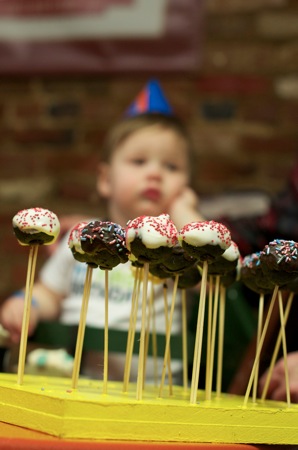